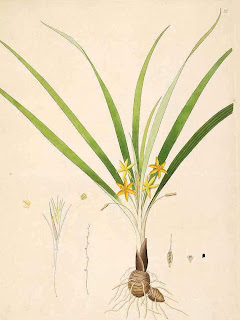 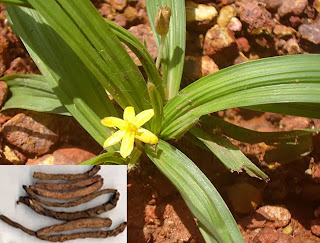 Morphology:
It is a perennial herb about 30 cm in height with a short or elongated root stock bearing several fleshy and lateral root which are blackish brown externally and cream internally.

Leaf:
Leaves are simple 15-45 cm long crowded on the short stem, sessile or short petiolate with sheathing leaf base and often produce adventitious buds at the tip when in contact with soil.


Flower:
Flowers are bright yellow distichously the upper few are male flower which are smaller in size, while the lower once are bigger and may be hermaphrodite or female.

Uses
A decoction of the powdered rhizomes is used in China as a general tonic and analeptic in the treatment of decline (especially of physical strength), lumbago, arthritis, chronic nephritis, hypertension and as an emmenagogue. In the Philippines, Nepal, Thailand and India, the rhizome is used as diuretic and aphrodisiac, and to cure skin diseases (externally), peptic ulcers, piles, gonorrhoea, leucorrhoea, asthma, jaundice, diarrhoea and headache. In Papua New Guinea, the rhizome and leaves serve as contraceptive while in India, it is used to induce abortion and to produce flour.

Curculigo orchioides Gaertn. Is an endangered rasayana herb which is popularly known as "Kali Musli". The plant is native to India, and holds a special position as a potent adaptogen and aphrodisiac in Ayurvedic system of medicine. It is an important ingredient of many Ayurvedic preparations and is considered to have aphrodisiac, immunostimulant, hepatoprotective, antioxidant, anticancer and antidiabetic activities.

- Weakening of the knees and lumbar regions, numbness of the 4 limbs, rheumatic arthritis.

- Given with milk and sugar for gonorrhea, leucorrhea, and menstrual derangements.

- In India, Pakistan and China, tuberous roots have been used for cancer, jaundice, asthma, wound healing. Rhizome juice extract has been used as tonic to overcome impotence.

- In India, plant rhizome has been used as an aphrodisiac.

1. It was first introduced in ‘Charak Samhita’ of ‘Agnivesha’, the epic treatise of the medicine school of thought of the Hindu system of medicine and narrated as an ingredient of a cigar to alleviate cough.

2. According to Bhavaprakash the drug is sweet, bitter, acts as an aphrodisiac.

4. Musali prepared as a paste with goat’s milk or honey and applied locally over the face, brightens the complexion of the face.

5. Roots are prescribed usually combined with bitters and aromatics in the form of electuary, the dose being one teaspoonful twice a day.

6. The drug is given with warm milk and sugar in dises of two drachms in gonorrhea, dysuria, menorrhagia, leucorrhoea and menstrual derangements

7. Juice of plant is applied on cuts and wounds (like tincture of iodine) and is considered as an effective anti-infective and healing agent

8. In most Ayurvedic formulations the plant is used as a substitute to “safed musli”

9. Rhizomes are prescribed in treatment of piles, jaundice, asthma, diarrhoea, and gonorrhea. The plant also holds the reputation of being a demulcent, diuretic, tonic and aphrodisiac.

10. Two tea spoon of dried tuber mixed with one cup of milk is taken internally twice a day for one week against leucorrhoea.