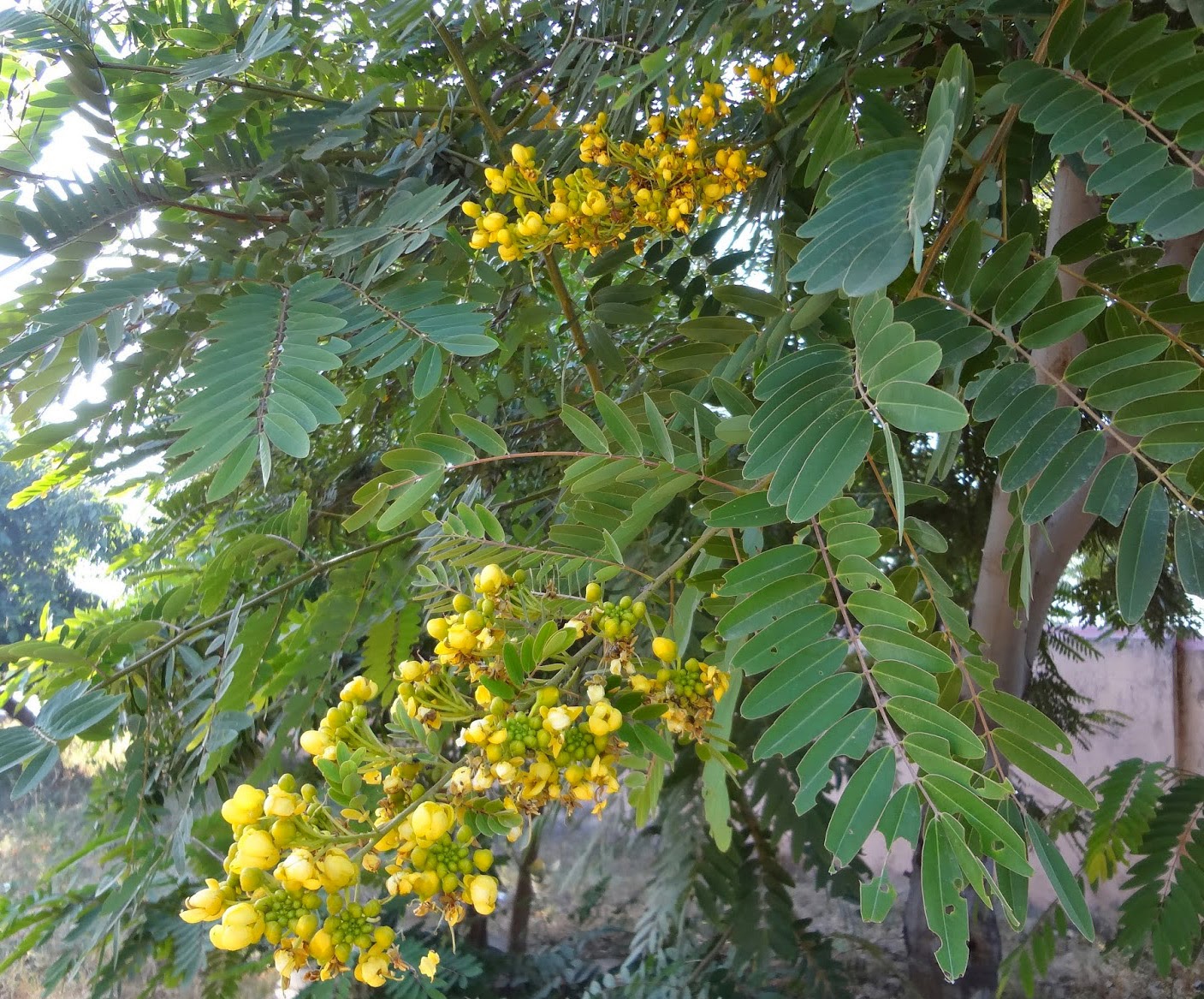 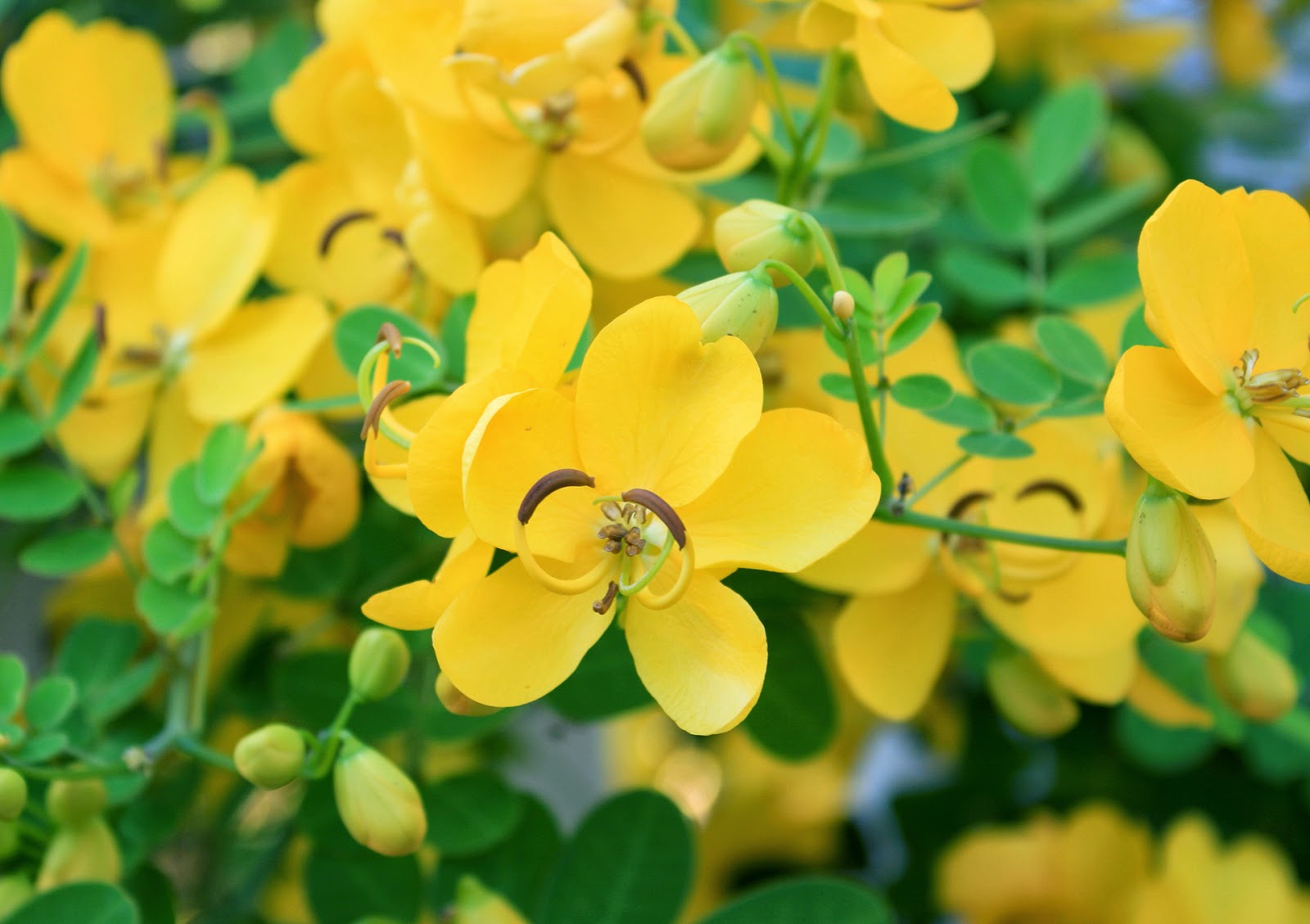 Cassia auriculata is especially famous for its attractive yellow flowers, which are used in treatment of skin disorders, body odour. The decoction of the flower may be taken internally. The dried flowers can be used as an external scrub for body odours. The five parts of the shrub(Root, leaves, flowers, bark and unripe fruits) are taken in equal quantity, dried and then powered, to give ‘Avarai Panchaga Choornam’ which gives a good effect in treatment of Diabetes. It establishes good control on sugar levels and reduces symptoms like Polyurea and thirst in Diabetic

Cassia auriculata is well admired in the alternative medicines for its wide usage in Ayurveda, Naturopathy and Herbal therapy. This is a perennial shrub, growing to a height of 30 to 60 cm. It has a circular, solid and strong stem, brown in colour, with several branches. It has compound, stipulate leaves, yellowish green in colour and huge yellow flowers. The fruit of Tenner`s Cassia contains 7 to 10 seeds.

The plant is called `Tenner`s Cassia`, because the bark is one of the most priceless of Indian tans, containing tannin. This plant is extensively cultivated in area which is dry and warm. In India it is found in western region like that of Rajasthan, Maharashtra, Madhya Pradesh and Gujarat, Tamilnadu.

As per the practitioners of Ayurveda, Herbal therapy and Naturopathy, Tenner`s Cassia is `kapha` and `pitta dosha` suppressant. Its main role is to bind the cells in the body. It is also a good vermicide and is helpful in coagulation of blood. It also checks the flow of extra amount of urine and helps in absorption of required amount of fluids in the kidneys and intestines. The properties of the plant help in increasing the density of the sperms and is widely used in premature ejaculation. It plays a great role in menstrual disturbances and also prevents vaginal discharge. It is also effective in skin related problems.

The powder of Tenner`s Cassia seeds is applied in the eyes for cataract and improving the general condition of eyes. The bark of the plant is useful in checking secretion or haemorrhage. The leaves act as a revitaliser. They alleviate feverishness and create a feeling of coolness. They also reinstate the perturbed processes of nutrition. The leaves and petals are both moderately astringent in taste. The leaves contain minute amounts of mucilage, though they are absolutely non-toxic; the taste and smell are unappetising. A combination of the leaves forms a refreshing drink. Its seeds also induce a chilling effect.

Often the juice from the flower of Tenner`s Cassia is used in the conditions like premature ejaculation, decreased sperm count and impotence. Even the decoction of whole plant is used in skin related ailments and worm infestation. It is also used as female tonic in menstrual disturbances and leucorrhea. This plant is well known for its healing power and curative properties and is useful in arresting secretion or bleeding. They also restore the disordered processes of nutrition. Even this plant is used to be effective in numerous cases like, diabetes, conjunctivitis, aching throat, troubled menstruation, opthalmia, also arresting bleeding. Even diseases like diarrhea and dysentery can be cured by the plant.

Tenner`s Cassia is also useful in diabetes. A decoction of the entire plant or buds can be used to cure this disease. The pulverisation of the herb, blended with honey, is effective to the same extent in such a case. The seeds can be used in a similar manner as flowers. Finely powderised, decorticated seeds should be used as a sprinkling powder in the cure of conjunctivitis.

According to Ayurveda, the herb is useful in regularising the menstrual cycle. The flowers and flower buds can be utilised constructively as pessaries to arrest unstoppable menstrual flow. The seeds of Tenner`s Cassia are successfully applied in purulent ophthalmia i.e. redness of the eye or conjunctiva. They should be exquisitely pulverised and blown into the affected eyes. A liniment made from them and oil can be administered to the affected eye with absolute surety.

Tenner`s Cassia, the herb is used to treat different diseases as recommended by the practitioners of alternative science. Though the entire part of the plant is used in preparing medicines, care should be taken while using it as improper amount and usage can lead to inaccurate results.

Dosages:
Boil 5gram poweder with glass of water and drink it after filtering.

Posted by Herbalkart.in at Saturday, March 15, 2014 No comments: