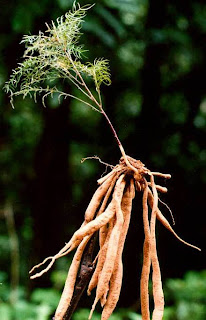 Shatavari is a climbing plant which grows in low forests all through India. It is mostly the roots of the plant that are used for medicinal purposes. Shatavari has been used in India for thousands of years for its therapeutic and tonic properties. It is an all-round tonic and rejuvenative which can be given to a person with any type, constitution, males or females, youngsters or elders. Indeed, Shatavari is the Universal Rasayana. It has various synonyms like atirasa (very juicy), satpadi (possesses hundreds of roots), suksma patra (has tiny leaves etc).

The plant grows all over India in tropical areas and is found in Himalayas, up to an altitude of 1300-1400 meters. The plant is an armed climber, growing 1-2 meters in length. The leaves are green, shiny, small, and uniform and like pine needles. The flowers tiny, white, in small spikes. The roots are finger-like, clustered, tuberous, 30 cm to 1 meter or more in length and tapering at both ends. The fruits are globose, pulpy berries, purplish black when ripe. The plant flowers in July and fruits in September.

Shatavari increases the white blood count and stimulates greatly macrophages which helps to combat their candida. Shatavari also contains various bioflavinoids, and essential vitamin B components, and the essential elements of calcium and zinc.

Introduction:
Shatavari is actually considered to be the most helpful herb for women as it helps in balancing the female hormonal system. It is the main herbal rejuvenative for women. Shatavari totally nourishes and cleanses the blood and the female reproductive organs, enhancing female fertility. It nourishes the womb and ovum and almost prepares the female organs for pregnancy and prevents threatened miscarriage. It also improves super lactation. Shatavari contains the phyto-estrogens, the precursors of estrogen and is really very useful for women who suffer from low natural estrogen levels as a result of menopause, hysterectomies or oophorectomies.

Shatavari has been mentioned in Ayurvedic texts like the Charak Samhita and Susruta Samhita, and Astanga Samgraha. It is stated that shatavari promotes maternal health and its meticulous use as a galactagogue (enhances breast milk secretion in lactating mothers). Shatavari actually literally means "having a 100 spouses" and ayurvedic texts accurately claim that shatavari strengthens a woman to the point where she is being capable of producing thousands of healthy ovum.

Ayurveda has called Shatavari the Queen of herbs and is the primary herb recommended for female health. Among the three Ayurvedic doshas of Vata, Pitta and Kapha, Shatavari efficiently helps in balancing Pitta Dosha. Shatavari's juice is sweet (madhur) and also in nature bitter (tikta). It is a natural coolant.
Charaka has categorized it as balya promoting strength or a tonic, vaya sthapana – promotes longevity, sukra janana (spermatogenic). Also, he has cited it as a rejuvenative to rasa and mamsa dhatus and mamsavaha srotasa.

Susruta has mentioned it as sukra sodhana – purifies the sperms or semen. Whereas, it is quoted as vajikara – augments the sexual vigour and quantity of semen (Sarngandhara Samhita). It is also classified as samsamana – neither it aggravates nor it eliminates the doshas from the body, but simply pacifies the aggravated doshas especially, pitta.

Applications / Uses
The roots and leaves are used for medicinal purpose. The plant is used both internally as well as externally. The medicated oil is the best medicament, in vata diseases and in vata – pitta diseases of the head, it is useful for massage. The paste of its fresh leaves is applied on burning sensation of the skin in smallpox and bullae. It strengthens the muscles, alleviates the vata dosha and reduces pain in lumbago, sciatica, inflamed joints and also in paralysis or paresis.

Internally, Shatavari is used as a cure for various diseases. The fresh juice of its roots with honey, reduces the burning sensation and pain in tumors due to pitta. Shatavari ghrita (ghee) is the best panacea for acid peptic disease (hyper acidity). It is an effective demulcent for the dry and inflamed membranes of the lungs, stomach, kidneys and sexual organs. It is effective for the treatment of gastric and duodenal ulcers, along with hyperacidity. In diarrhea and dysentery associated with bleeding, the medicated milk or ghrita is extremely benevolent. Shatavari also augments the appetite and stimulates the liver. It also increases the quality and quantity of breast milk in nursing mothers, hence Shatavari preparations are traditionally given is postpartum period. It also is anabolic to uterus, hence, useful in uterine hypoplasia in young girls.

Shatavari also increases the urinary output, hence beneficial in urinary stones and Dysurea. It also works well as a rejuvenative, to improve the eyesight when given from prolonged duration. Phala ghrita is one of the well known preparations of Shatavari, which is used as an all round tonic for the uterus. It improves the uterine growth, mitigates dysmenorrheal and menorrhagia, augments the fertility and imparts anabolic properties. Phala ghrita is the formulation designed by an ancient seer – Bharadvaja.

Shatavari is the main Ayurvedic rejuvenative for the female, as Ashwagandha is for the male, although they have some effect on both sexes. It is an extremely nutritious tonic for women, from menarche to menopause.


Health Benefits of Satavar, Satmuli (Asparagus)
- Asparagus is one of the most significant vegetables, which is known to contain glutathione (GSH), an antioxidant, which is helpful in fighting deadly diseases such as cancer and Alzheimer’s disease.

- Loaded with an abundance of amino acid called asparagine, this herbaceous shoot helps in eliminating wastes out of the body. It is for this reason that some people excrete smelly urine after consuming asparagus.

- When taken in the form of juice, asparagus effectively reduces the acidity in the blood.

- Asparagus also contains a unique phytochemical, which produces anti-inflammatory effects that are highly useful for relieving arthritis and rheumatism.

- Particularly for people who are diabetic, asparagus when taken as a liquid contains healthy minerals that are essential for controlling blood sugar levels.

- Asparagus, when consumed during pregnancy, assists in reducing the risk of birth defects and low birth weight. This is due to the presence of folic acid, calcium and other minerals.

- Rich in potassium, vitamin A, folate and glutathione, asparagus acts an anti-ageing deterrent that protects cells against toxins such as free radicals.

- It is one of the few herbal, containing inulin, which feeds natural bacteria living in the large intestine. This prevents overgrowth of yeast and keeps the digestive system in good health.

- The diuretic effects of asparagus are highly useful in relieving swelling and bloating caused due to premenstrual syndrome in women.he strong composition of magnesium in asparagus aids in alleviating irritability, fatigue and depression.

The list of different illnesses and conditions, cured by the use of Shatavari is indeed impressive.

3) PMS symptoms such as those excessive bleeding, cramps, pain, bloating

7) Decrease in the libido in both men and women