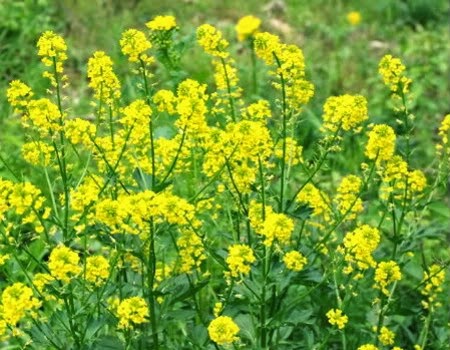 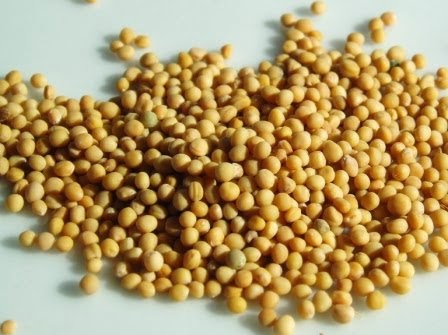 White mustard seeds are hard round seeds, usually around 1.0 to 1.5 mm (0.039 to 0.059 in) in diameter, with a color ranging from beige or yellow to light brown. They can be used whole for pickling or toasted for use in dishes. When ground and mixed with other ingredients, a paste or more standard condiment can be produced.

Medicinal use:
White mustard seeds are considered to be analgesic, carminative, expectorant and stimulant. Traditionally, they have been applied in cases of digestive complaints. An infusion of the seeds is useful in treatment of chronic bronchitis, rheumatism, muscular and skeletal pains (it stimulates circulation in the pain area).
People take white mustard for “clearing the voice,” preventing infection, causing vomiting, increasing urine flow (as a diuretic) to relieve water retention, and increasing the appetite. Some people apply white mustard directly to the affected area for cough and colds, chest congestion, bronchitis, swollen joints, arthritis-like pain (rheumatism), osteoarthritis, back pain (lumbago), and sore mouth and throat. It is sometimes used in a bath to treat paralysis.

APPLIED TO THE SKIN
Coughs and colds.
Bronchitis.
Arthritis-like pain (rheumatism).
Swelling (inflammation) of the mouth, throat, and joints.

Other conditions.
White mustard is safe when consumed as food. But there is not enough scientific information available to know if it is safe when used as a medicine that is taken by mouth or applied to the skin.
Applying white mustard to the skin for an extended period of time can cause burns, blisters, and ulcers.


Pregnancy and breast-feeding: It’s UNSAFE to use white mustard in medicinal amounts if you are pregnant. There is some evidence it might start your menstrual period and cause a miscarriage.
Posted by Herbalkart.in at Friday, January 02, 2015 No comments: 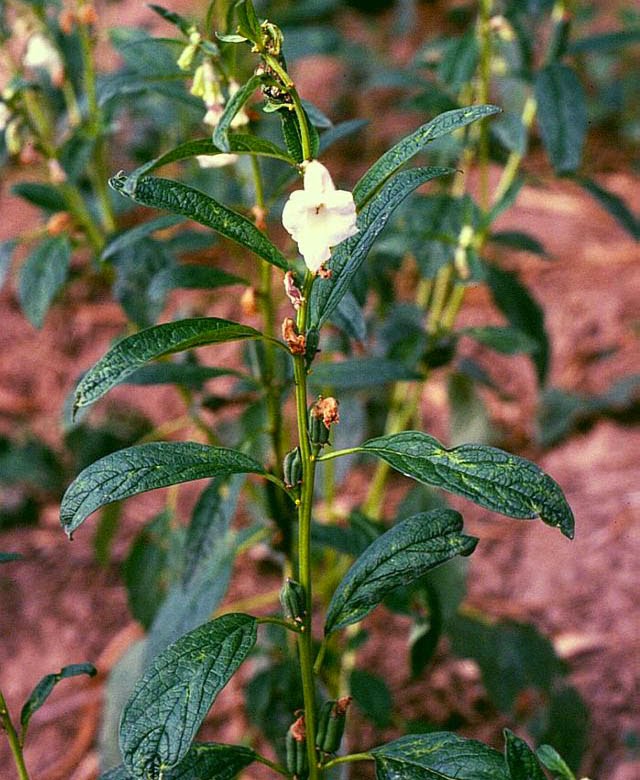 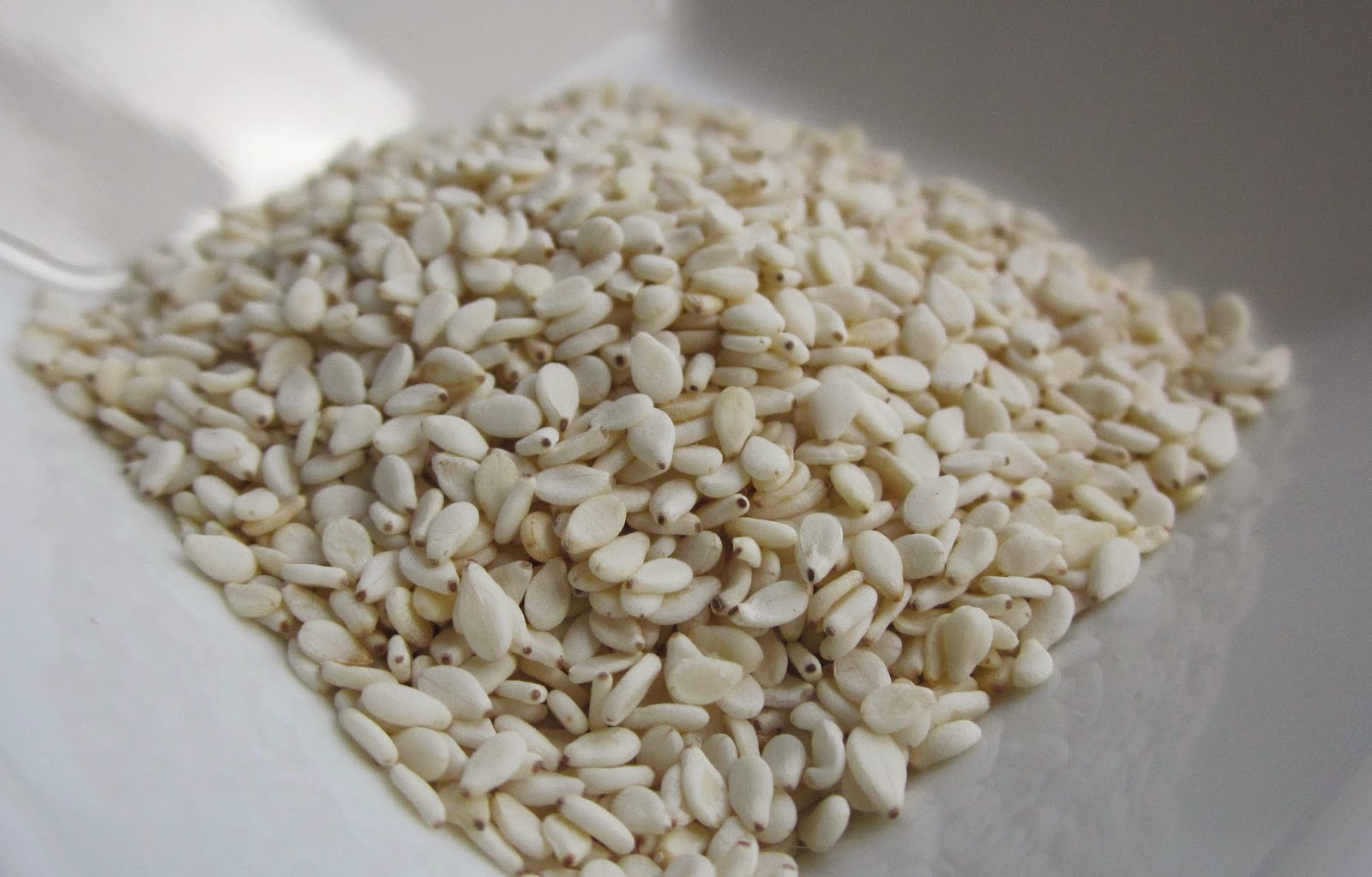 Sesame seeds are small. The size, form and colours vary with the thousands of varieties now known. Typically, the seeds are about 3 to 4 mm long by 2 mm wide and 1 mm thick. The seeds are ovate, slightly flattened and somewhat thinner at the eye of the seed (hilum) than at the opposite end. The weight of the seeds is between 20 and 40 milligrams.

Sesame seeds come in many colours depending on the cultivar harvested. The most traded variety of sesame is off-white coloured. Other common colours are buff, tan, gold, brown, reddish, gray and black.

The benefits of sesame are not just culinary but this nutrient dense condiment is good for our bodies as well. Sesame seeds include a combination of vitamins and minerals which make it one of the healthiest foods in the world. There are several varieties of sesame seeds depending upon the type of cultivar such as white, black and brown seeds. White sesame seeds have higher iron content than black ones and are mostly used as ingredients in food or in the form of oil.

High Protein Vegetarian Diet:
Sesame seeds are a good source of dietary protein with high quality amino acids making up 20% of the seed. Thus, they are perfect to form part of a high protein vegetarian diet. Just sprinkle them over your salads, subzis and noodles.

Prevents Diabetes:
Sesame seeds contain magnesium and other nutrients that have been shown to combat diabetes. Usage of sesame seed oil as the sole edible oil has been found to be effective in lowering blood pressure and plasma glucose in hypersensitive diabetics.

Cures Anemia:
Sesame seeds, particularly the black ones are rich in iron. Hence, they are highly recommended for those suffering from anemia and weakness

Cardiovascular Health:
Sesame seeds are high in monounsaturated fatty acid, oleic acid which helps in lowering bad cholesterol and increasing good cholesterol in the body. This prevents the risk of coronary artery disease and strokes

Digestive Health:
Sesame seeds support a healthy digestive system and colon as they are rich in fiber. This high fiber content helps to smooth the functioning of the intestine, thus facilitating waste disposal and relieving constipation.

Bone Health:
Sesame seeds contain zinc which boosts bone mineral density as well as bone health. Deficiency of this mineral can cause osteoporosis in the hip and spine area. Sesame seeds are a great source of calcium, a trace mineral that is vital to bone health.

Nullify the Effects of Alcohol:
Sesame seeds help the liver to decompose the harmful effects of alcohol as well as other substances that generates poisoning in the body. 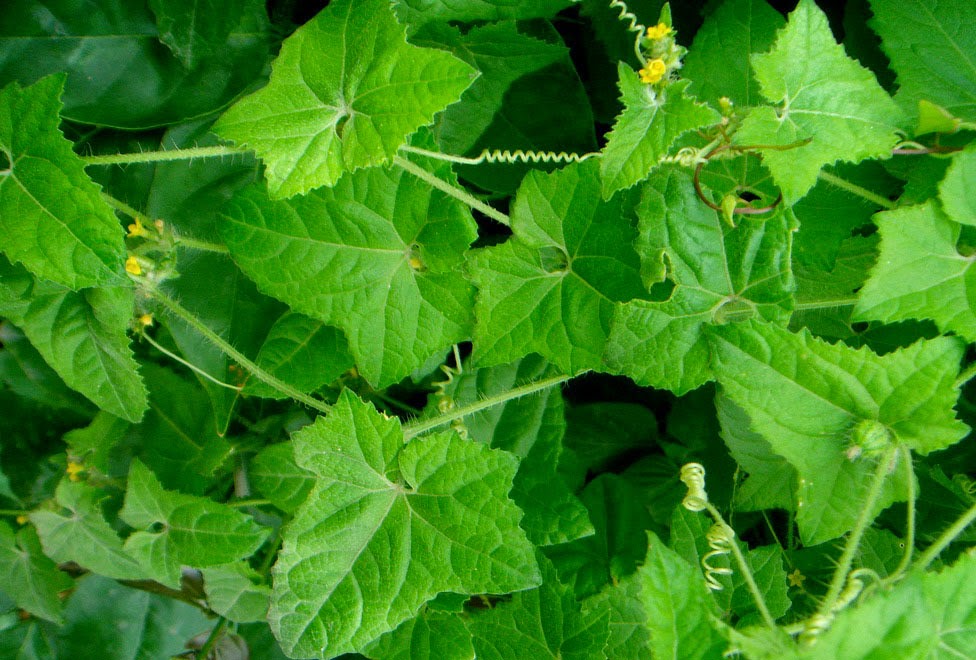 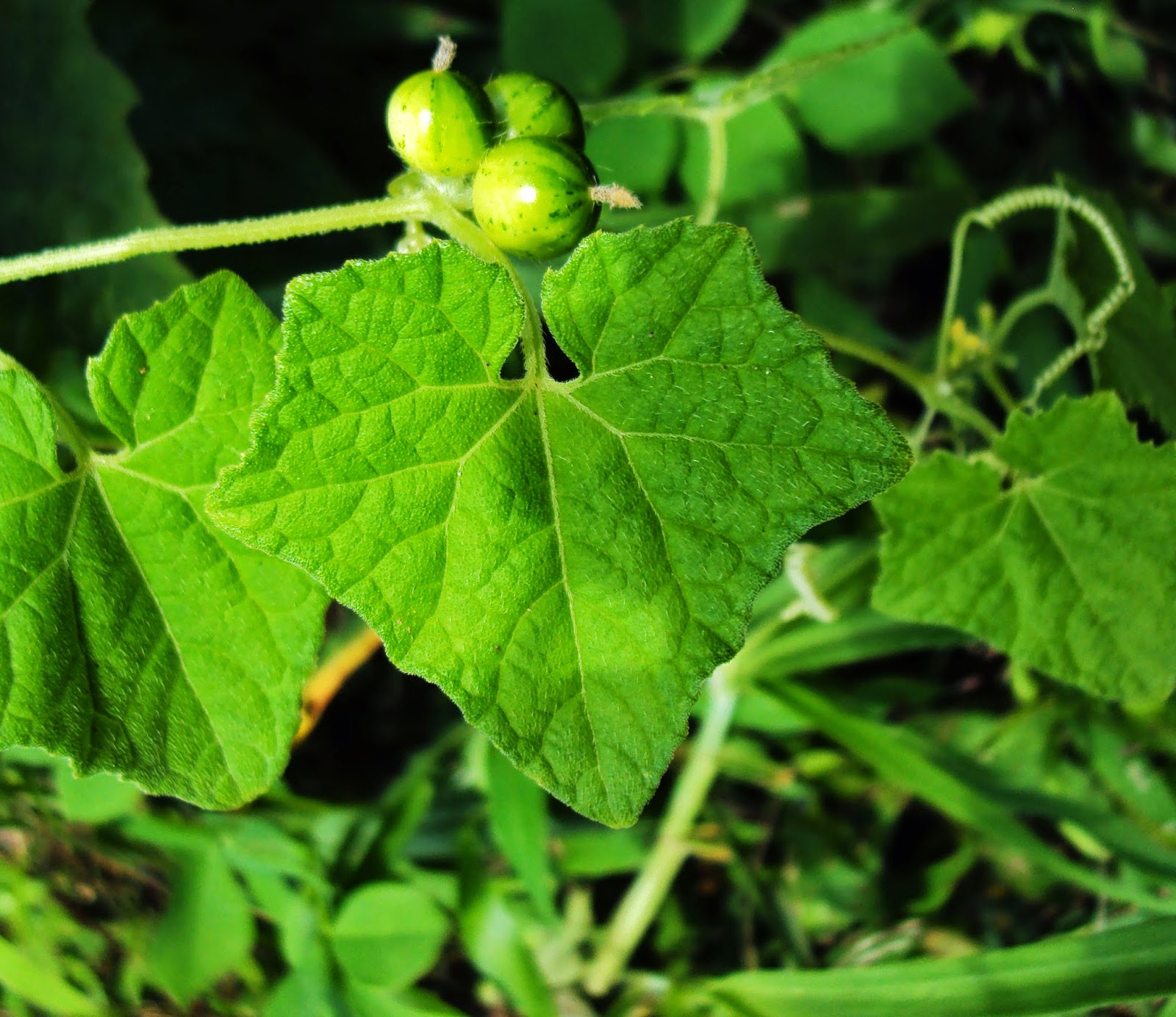 Description:
An annual sparse climber that spreads over vegetation. Symmetrical ovate leaves, angularly shallowly to deeply 3-5 lobed, are 3-9 cm long. Flowers yellow 1 cm across. Pea-sized fruits are green, turning to orange and then red, as they mature. Flowering: April-October.

Medicinal Benefits:
The plant has expectorant properties and is prescribed against chronic diseases with cough as a predominant symptom. The root of the plant, when masticated, relieves toothache; a decoction of the root is given in flatulence. The tender shoots and bitter leaves are used as gentle aperients and prescribed in vitiligo and biliousness. A decoction of seed is considered sudorific. 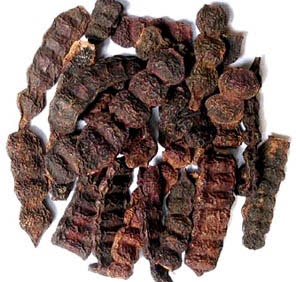 Shikakai is a commonly used herb that has many remedial qualities. It is popularly referred as "fruit for the hair" as it has a naturally mild pH, that gently cleans the hair without stripping it of natural oils. Shikakai is used to control dandruff, promoting hair growth and strengthening hair roots. Shikakai naturally removes the dirt and excess oil accumulated on the scalp.

* Increases bounciness and silkiness of hair

* It is also used to combat dandruff and lice.

The powder or the extract from the bark, leaves or pods is used as a hair cleansing agent. It is very effective in removing oil and dirt from hair. The normal practice is to apply oil to hair and scalp and allow it soak for some time. This will keep the body cool, reducing body heat and also prevent the scalp from getting dry. The powdered Shikakai is used as a shampoo to wash off the oil.

Since Shikakai is naturally low in pH, therefore it is extremely mild, and does not strip hair of its natural oils. Usually no rinse or conditioner is used since Shikakai also helps in the disentangling of the hair

Actually the bark of Shikakai is high on saponins - chemical compound; these act as foaming agents. Therefore Shikakai is such a good cleaning agent and hence has been traditionally used as a detergent

Take a small portion of the powder in a bowl and add water. Stir gently until you get a paste. Apply on your hair instead of a shampoo and rinse well using water 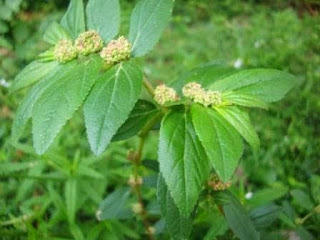 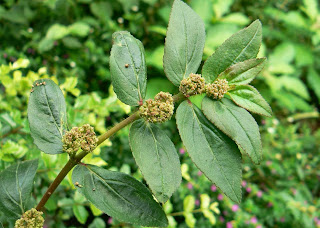 Description:
Euphorbia hirta, or asthma weed, has been used medicinally in various cultures for centuries. The entire plant can be used as a natural medicine whether it is collected during its dried, fruiting, or blooming stage. Each part of the plant is effective for treating different ailments.

Siddha Medicinal Uses:
For Leucorrhoea, in woman the paste or powder of the leaves is given along with butter milk. The leaves acts as a Laxative and Coolant. Paste of the leaves or Powder is applied externally to cure swellings and ulcers.

It help the body to expel worms and other parasites. Applying crushed leaves to a wound can stop bleeding, and it contains anti-inflammatory agents that speed the healing of pimples, wounds, and boils.

Ayurvedic medical practitioners in India use euphorbia hirta to treat bronchial conditions. An extract of this medicinal plant can ease the symptoms of colds, asthma, bronchitis, and coughs. It is also used to treat urinary tract infections and venereal diseases, such as syphilis and gonorrhea.

This herb is an effective home remedy for male sexual disorders. The plant can also help prevent premature and involuntary ejaculation in males.

Euphorbia hirta promotes the healing of various female disorders. A decoction of the root is given to increase lactation in nursing mothers who aren’t producing enough milk, but it should never be administered to pregnant women. Different parts of the plant can induce miscarriage.

Euphorbia hirta contains antiviral and antibacterial properties which make it effective in treating a wide variety of diseases. It can reduce the symptoms of diarrhea and is commonly used to treat dysentery.

A decoction made from the root can be used as a gargle to treat mouth ulcers and thrush. Ingesting large amounts of this herb can induce vomiting.

The milky extract of the fresh plant is applied externally to cure warts.


Posted by Herbalkart.in at Thursday, January 01, 2015 No comments: