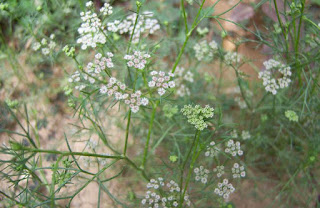 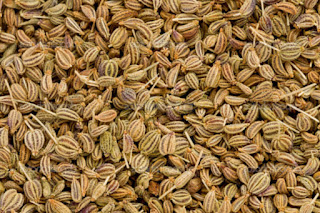 Ajwain is an erect, hairless or minutely pubescent, branched annual herb. The stems are grooved. the leaves are rather distant, 2-3-pinnately divided in narrow linear segments. Flowers are borne in terminal or seemingly-lateral stalked, compound umbels, white and small. The fruits are ovoid, aromatic, greyish brown. The mericarps, which are the components of the fruit, are compressed, with distinct ridges and tubercular surface, 1-seeded. This is what is used as the spice Ajwain, in cooking.

Ajwain in Hindi and Yavanika or Agnivardhana in Sanskrit. ‘Agnivardhana’ –meaning, stimulation of agni or digestive fire in our body. Its pungent taste and aromatic smell has made it a favored spice in preparing pickles, confectionary, curries, biscuits and beverages. It is also used as an effective preservative and anti-oxidant. Crushed Ajwain seeds find utility in pot-pourri and scented powders.


Ajwain was originally grown in Mediterranean region. It is now grown in Afghanistan, Iran, Iraq, Pakistan, Central Asian countries, China and Africa. In India, it is grown in the plains and higher altitudes as a garden crop or in small fields.


Medicinal uses:
Ajwain is also traditionally known as a digestive aid, relieves abdominal discomfort due to indigestion and antiseptic.

Dissolve Kidney Stones: When the mix of Ajwain seeds +honey + vinegar is used for 10 days, it helps to dissolve kidney stone that ultimately remove with urine.

Ajwain reduces Gas and Flatulence: Ajwain is one of the best herbal wonder drug for gas, flatulence and indigestion. Ajwain distilled water is good for the above said problems and also enhances appetite.

Relieves diarrhea and colic due to their stimulating, carminative and anti-spasmodic properties.

Aphrodisiac: Consuming a teaspoon of powder obtained by frying equal quantities of Ajwain seeds, kemel of seeds from tamarind in ghee with one tablespoon honey and milk before bed-time makes an effective aphrodisiac increasing virility and averting premature ejaculation.

Mouth disorders: An infusion of Ajwain seeds with common salt makes an effective gargle for severe pharyngitis.
Posted by Herbalkart.in at Thursday, August 18, 2016