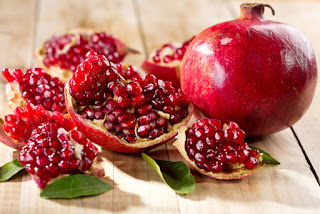 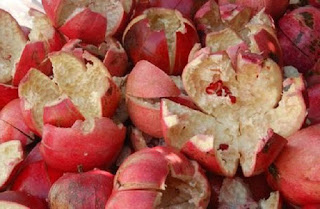 Pomegranate or Anar (Punica granatum) is an attractive fruit having lots of health benefits. It is a big gift on the earth from the God to the human beings. Pomegranate is a super seedy fruit having brilliant red seeds considered as the wonderful fruit in the world. It is also known as the seeded apple extensively used for its health benefits and medicinal values.

Pomegranates were originated in the surrounding area of the Iran in the ancient time. Now, it has been started cultivating all through the Mediterranean areas of the Middle East, southern Europe, northern and tropical Africa, Indian regions, Central Asia, Southeast Asia, parts of California and Arizona and etc. It is sufficiently available in the winter season from September to February and in the summer season from March to May.

Prevents from Anemia
-          It prevents from the anaemia as it contains sufficient amount of iron which helps in increasing hemoglobin level.

Induces Hunger
-          It induces hunger and manages thirst as well as acts as a good tonic for the stomach, liver and heart.

Prevents from UTI
-          It helps in curing the urinary tract infection.

Improves Digestion
-          It has both soluble and insoluble dietary fibres which improves the digestion as well as normalize the bowel movement.
-          It helps in increasing the libido in male thus enhances the fertility.

Treats Diarrhoea
-          Pomegranate peel extract is a great home remedy to treat diarrhoea and dysentery as well as to improve the digestion.

Provides Glow to Skin
-          Pomegranate peels have the highest amount of the antioxidants thus it nourishes the skin and makes it glowing and fair.

Provides Relief from Stress
-          Applying the paste of it on head helps in treating headache, half headache and other stress related problems.

Regulates Irregular Period
-          One table spoonful of Pomegranate powder with normal water twice a day is the best home remedy to normalize irregular periods.
Posted by Herbalkart.in at Sunday, August 07, 2016