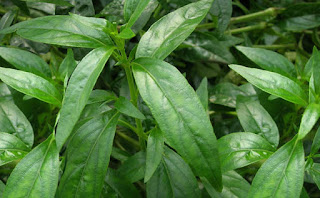 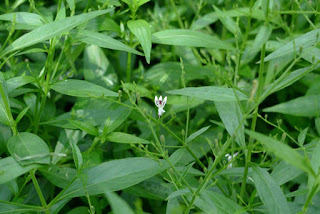 Andrographis Paniculata is traditionally known as kalmegh. The plant belongs to family Acanthaceae, native to India and Sri Lanka. It is an erect annual herb extremely bitter in taste in each and every part of the plant body. It grows erect to a height of 30-110 cm in moist shady places with glabrous leaves and white flowers having rose-purple spots on the petals. Flowers are small, solitary in panicles. Fruit is approximately 2 cm long. Seeds are numerous, yellow-brown in colour. The flowers of Siriyanangai looks like a snake cobra. This medicinal plant is used for snake bites in some villages.

The plant grows in waste grounds and prefers moist habitat. The herb is bitter in taste and has weak odour. The whole plant may be used in medicine. It is widely cultivated in southern Asia, where it is used to treat infections and some diseases, often being used before antibiotics were created. Mostly the leaves and roots were used for medicinal purposes.

Both in Ayurveda and Unani, it is often confused with 'Chirayita' (Swertia chirata), but both are different plants. It is widely available in Arabia and It is given for fever along with several herbs.

Properties and uses of Siriyanangai
Siriyanangai has been found to be an effective anti-biotic, anti-viral, anti-parasitic and immune system stimulant. It has anti-inflammatory and anti-tumor properties. It has been described as antipyretic and hepatoprotective.

1. It is used for fever and liver disorders.
2. It has beneficial effect in reducing diarrhoea.
3. It is used in treatment of Jaundice.
4. It is used in case of diseases like flu, sinusites, upper respiratory tract infection and cough.
5. Used as one of the best remedies for Malaria.
6. It acts to dispel heat and remove toxins.
7. It is a blood purifier, so used to cure torbid liver, jaundice, and dermatological diseases.
8. It is used in viral hepatitis, children’s bowel complaints, gastric acidity, liver congestion, flatulence.
9. Tincture of roots is tonic, stimulant and aperients.
10. Kills intestinal worms and support intestine.
11. Siriyanangai is also used for snake bites in the villages of Tamilnadu, Kerala and Karnataka
12. It is also used in Ayurvedic Preparation which is used to treat vitiligo.